Kakapo to Kea: The unique birds of New Zealand and where to spot them all

What type of cheeky mountain parrot enjoys nibbling on car windscreen wipers? Which bird appears on the New Zealand fifty–dollar note? We bet you want to know! 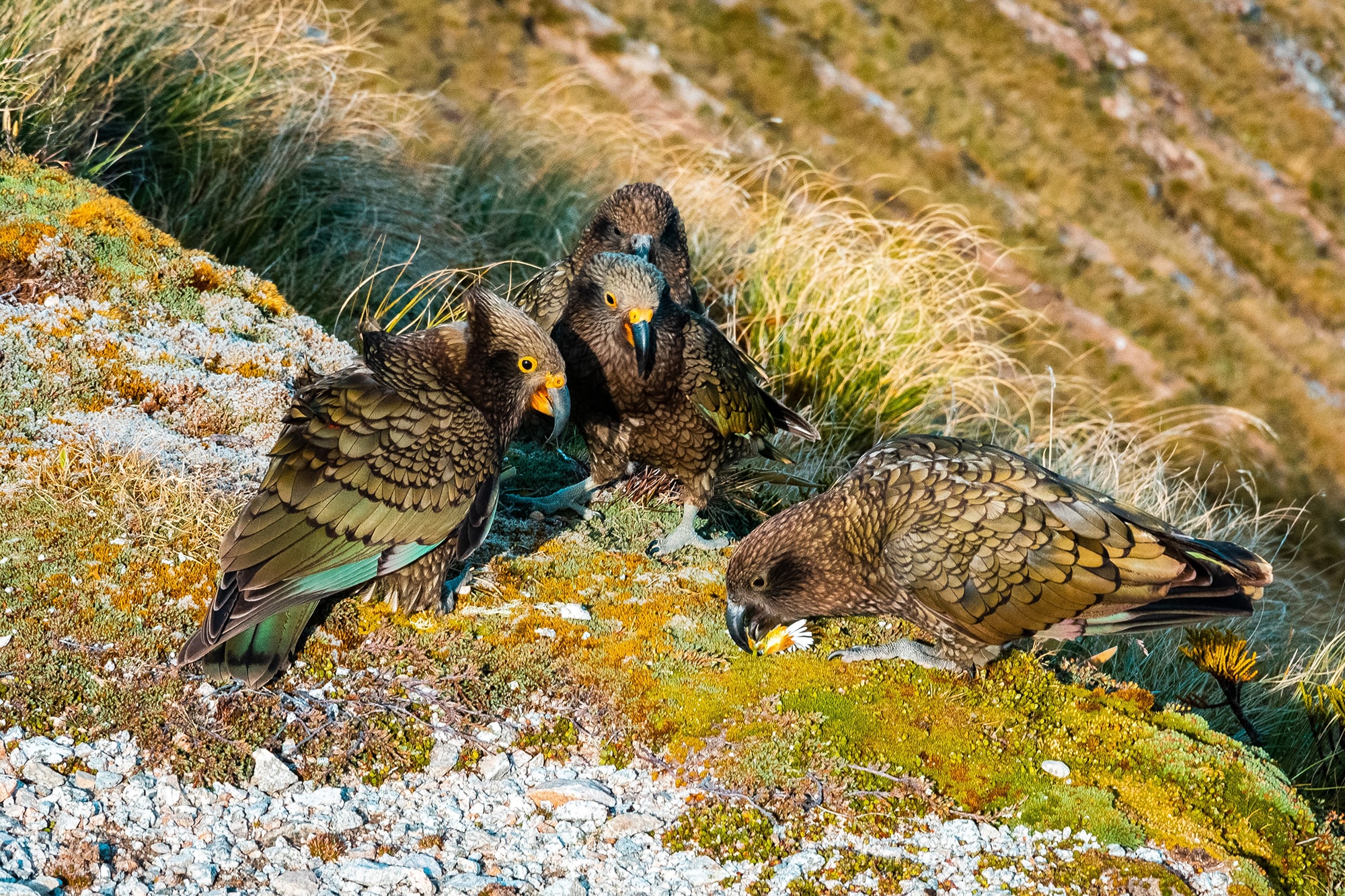 Photo by Sébastien Goldberg via Unsplash

New Zealand is home to a rich diversity of flora and fauna. This includes over 200 species of native birds, many of which are endemic to the country, meaning they are not found anywhere else in the world. Alongside kea parrots and sweet–singing tui, you’ll also find many flightless bird species such as the loveable kakapo, the chubby takahe, and the bizarre little kiwi. These feathered friends may not be able to take to the skies, but they are certainly worth getting to know!

It is important to understand that many of these birds are threatened with predation, habitat loss, and extinction. Many conservationists are working hard to protect these rare species. To raise awareness of the delightful birds of New Zealand, we’d like to introduce you to a handful of the most curious candidates. From sassy parrots to majestic albatrosses, read on to find out the secrets of New Zealand’s most iconic avian creatures, and the locations you might be able to glimpse them!

Kea parrots are quite a popular subject of discussion these days, following a recent trend of adorable videos making their rounds on the internet. They reveal just how intelligent and entertaining these unusual birds are. Like the common crow, kea parrots appear to be extremely smart at adapting to their environment. They are notorious for being sneaky and daring, and have been caught doing some very naughty things including nibbling on windscreen wipers, snatching food, taking sips from unattended drinks, stealing someone’s passport, and even play–fighting with each other in the snow!

Where to see kea parrots in New Zealand: These olive–green birds are found in the forested alpine regions of South Island, earning them the nickname “mountain parrot”. They are attracted to people, so keep a lookout for these curious creatures. Just be sure to keep those valuables hidden!

After a quick health check this young #kakapo went up the dracophyllum and continued to give us disapproving looks until we cleared out. #birdsofaotearoa #nzbirds #birding #parrot #nz #cannon #newzealand #endangeredspecies #conservation #docnz #kakapo

The mossy green kakapo is the oddest parrot you’ll ever come across. Large and bulky, it is the only species of flightless parrot in the world, and are mostly solitary, occupying the same forested area and calling it their home for many years. Nocturnal in nature, the kakapo is sometimes called the owl parrot or night parrot.

Like many of New Zealand’s flightless birds, kakapo are considered critically endangered due to predation by mammals such as cats and stoats. Fortunately, conservation efforts have been giving the kakapo a fighting chance to survive, leading to a steady increase in numbers in recent years.

Where to see kakapo in New Zealand: The general public is currently unable to view the rare kakapo in the wild due to heavy restrictions on visiting its protected habitat. While conservationists work to get the population get back on track, learn more about how you can get involved in the Kakapo Recovery program!

The national symbol of New Zealand is also one of the most recognizable flightless birds in the world. Kiwi birds are about the size of a chicken and are known for their strange pear–shaped body, pointed beak, and short hair–like feathers. While the fruit of the same name can be found in abundance at many grocery stores, it might come as a surprise that the bird is actually rather elusive. Like the kakapo, kiwis are nocturnal by nature and highly vulnerable, making them difficult to spot in the wild. While you can try your luck on a kiwi–spotting tour, you can also find these cuties at a few zoos and sanctuaries around the country.

Where to see kiwi birds in New Zealand: For up–close viewings, we suggest the Kiwi Birdlife Park in Queenstown, Kiwi House and Native Bird Park in Otorohanga, and The National Kiwi Centre in Hokitika.

This is a Takahē! We watched as it chomped its way around the grass in @visit_zealandia outside Wellington in New Zealand, during our self-directed residency last year. Believed extinct for a long time the bird was rediscovered in the south islands Murchison Mountains after a planned search in 1948. Watching as this bird wondered around, ate and squeak like a rusty gate was one of the highlights of our trip to Wellington. This month has been Takahē awareness month 💙 . . . . . #avianz #takaheawarenessmonth #nzbirds #newzealandbirds #birdsofinstagram #instabirds #takahe #Aotearoa #newzealand @docgovtnz

When it comes to rare and elusive flightless birds, the ground–dwelling South Island takahe is an incredible success story. Once declared extinct in 1898, its exciting rediscovery in one of the hidden valleys of the Murchison Mountains half a century later put this special creature back on the map. Endemic to New Zealand, only about 200 remain in the wild, but this is set to change! Careful recovery efforts initiated by the New Zealand Department of Conservation have been invaluable for the continued protection of this beautiful species.

Where to see takahe birds in New Zealand: The protected Murchison Mountains in Fiordland National Park are off–limits to humans for good reason! Visit sanctuaries such as the Te Anau Bird Sanctuary and Orokonui Ecosanctuary for takahe viewings.

Tui on a flax flower stalk, with pollen on top of its bill. The iridescent green feathers with a reddish brown back and white lacy throat tufts makes it uniquely beautiful. The Tui is an endemic passerine bird of New Zealand. It is one of the largest species in the diverse Australasian honeyeater family and one of two living species of that family found in New Zealand, the other being the New Zealand Bellbird. . . Shot near Lake Matheson, Fox Glacier, New Zealand 🇳🇿

What gives a tui away? The small tuft of white feathers tickling its neck, of course! Looking much like a little white bowtie, the tui’s charming physical trait proves that New Zealand is home to some of the best–dressed birds! Just as curious, tui have well–developed vocal muscles, giving them the ability to make very complex calls. They are even able to imitate human speech, much like certain parrots can. Talk about talented!

Where to see wild tui birds in New Zealand: Found throughout New Zealand, they frequent native forests and bush reserves, and are usually seen near flowering plants as they feed mainly on nectar. Listen out for their sweet singing!

You might be mistaken in thinking that this plump little feather ball is one of New Zealand’s famous kiwis. However, this flightless curiosity is actually a weka, a bird commonly found on the South Island’s west coast. With a shorter beak and a more elongated body, the cheeky weka are much more commonly sighted than the kiwi. This kiwi wannabe has a unique way of walking, with intense bursts of scuttling followed by wary stalking.

Where to see weka birds in New Zealand: The weka is far more common than its kiwi doppelganger, and are frequently spotted along the western coast of the South Island, so keep your eyes peeled!

Happy #WorldPenguinDay! These flightless birds are often associated with Antarctica, where there are more than 12 million, but yellow-eyed penguins live in New Zealand. They’re also one of the rarest penguin species in the world with a population of around 4,000. Despite their petite population, it isn’t hard to find them if you know where to look. Or, you can just look on the back of the New Zealand $5 bill. 😀 . . . #teamcanon #canonusa #canon5dmarkiii #spiderholster #wildlife #wildlifephotography #earthcapture #naturephotography #birding #endangeredspecies #birdwatching #naturephotos #bird #ornithology #landscapephotography #birdsofinstagram #natureshot #otago #penguinsofinstagram #newzealand #travelnewzealand #penguinlove #yelloweyedpenguin #penguin #bestbirds #cute #yourshotphotographer #bbcwildlifepotd #birdlife @bbcearth @bbc @natgeo @natgeowild @travelandleisure

You might be surprised to know that there are three types of penguins native to New Zealand, namely the Fiordland–crested penguin, little blue penguin, and yellow–eyed penguin! The yellow–eyed species is easily distinguished by pale yellow markings that pass across each eye and around the head like a crown. Yellow–eyed penguins can be spotted in the southern part of South Island, with random sightings reported along the beaches of the Otago Peninsula. They are much taller and heavier than the little blue penguin, which you’ll soon discover are tiny compared to these giants!

A post shared by Oamaru Blue Penguin Colony (@oamarubluepenguincolony) on Nov 6, 2019 at 11:34am PST

With such a self–explanatory name, it’s probably obvious that these little ones are, well, little! In fact, little blue penguins are the smallest penguins in the world. With a height reaching around 25 centimeters, these critters are almost a third of the size of their yellow–eyed cousins.

Where to see little blue penguins in New Zealand: As the population of these waddling wonders has been decreasing, it’s best to join an organized tour at recognized observation areas to ensure the safety of these cutie pies.

A post shared by D'Artagnan Sprengel (@dartagnansprengel_photography) on May 11, 2020 at 10:10pm PDT

Did you know that the gorgeous kokako appears on the New Zealand fifty–dollar note? It’s a well–deserved spot to be featured, for sure! This large, long–tailed songbird is another classic conservation success, having recently undergone a period of active recovery following a decline in population over the last two decades. It would be wonderful to once again have the kokako freely thriving in the native forests of New Zealand. That said, the kokakos we see today are classified as North Island kokakos. Their South Island counterparts, which are slightly smaller and darker, are no longer observed in the wild and are considered possibly extinct. All the more reason to protect the North Island species from going down the same road!

Where to see kokako birds in New Zealand: Listen out for the rich, haunting call of these birds within the northern forests of North Island, as well as in sanctuaries and reserves such as Tiritiri Matangi Island and Mapara Wildlife Reserve.

Magnificent in its wingspan, albatrosses are known as the largest seabirds in the world. New Zealand has a few endemic species, including the northern royal albatross and southern royal albatross. They both have wingspans that stretch approximately three meters, making them look absolutely majestic as they glide through the air. Interestingly, royal albatrosses can live well into their 40s! 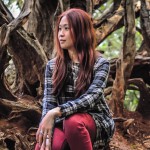 Angela is attracted to shiny things, sweet dessert, and coffee. She will attempt to befriend any bird! She has a curious habit of picking up books and not reading them in chronological order — often, she just outright spoils them by flipping right to the end and reading the final chapter.

About the Author / Angela Goh

Angela is attracted to shiny things, sweet dessert, and coffee. She will attempt to befriend any bird! She has a curious habit of picking up books and not reading them in chronological order — often, she just outright spoils them by flipping right to the end and reading the final chapter.
← 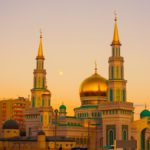 Previous Story
From Turkey to Iceland: How Eid al–Fitr is celebrated around the world
→ 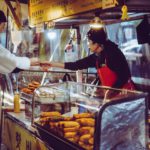 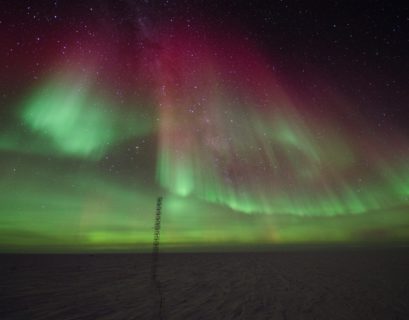 Most people around the world have heard of the northern lights, or aurora borealis. Here’s everything you need to know about its cousin...